Laser Light Toys and Your Dog 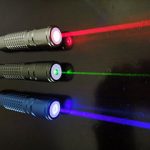 When my husband and I adopted our dog Kensi, one of the first things we noticed was her obsession with light. If we brought out our cell phones she immediately started looking for the light on the floor. The same thing happened if we turned on a flashlight. To this day, if she is riding in the car with us and the sun glints off something in the car she will chase that reflection until we can figure out what is causing it and stop it. If we open a door into a dark room she will bound in chasing the light from the hallway that shines on the wall of the darkened room. I know this doesn’t sound like much of a problem, but when we first brought her home it was constant. She chased any kind of light or reflection. She was obsessed. Our guess is that one of her previous owners, she’s had several, played with her using a laser toy or flashlight, encouraging her to chase the light.

According to Dr. Nicholas Dodman, a veterinary behaviorist at Tufts’ University Cummings School of Veterinary Medicine, laser toys can kick in dog’s prey drive  “They can’t help themselves; they are obliged to chase it,” in an interview he gave Life’s Little Mysteries in 2012.

But what happens when a dog can never catch the prey they so desperately want to catch? “They can get so wound up and driven with prey drive that once they start chasing the light they can’t stop. It becomes a behavior problem,” Dodman said in the same interview which is posted on The Huffington Post. “I’ve seen light chasing as a pathology where they will just constantly chase around a light or shadow and pounce upon it. They just spend their whole lives wishing and waiting.”

So, take it from a dog owner who has a dog that was encouraged to chase lights. It can become an obsession to the point that every shadow or reflection is something your dog must chase. It is not fun for her and it is not fun for us. There are some other great alternative ways to spend quality time with your dog, from a rousing game of fetch to a pleasant stroll around the block.

After two years of redirecting Kensi, every time she wants to chase lights and shadows, her obsession is better. The car is still a problem, but we are working on it.