5 Things You Need to Know About the Scottish Fold 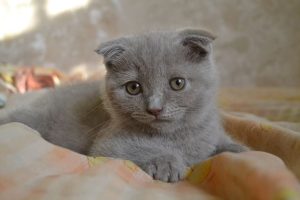 Someday, cats might take over the world. Well, that’s what people say when their cat plays Jedi mind tricks on them to do their bidding. This myth isn’t far from the truth, because there are cat breeds with a high IQ that are fast learners.

Take the Scottish Fold as an example. While these cats are not chatty and have low energy levels, they can be quite affectionate. In terms of intelligence, you will find that playtime tends to make them learn new things.

The origins of Scottish Fold cats can be traced back to “Susie,” a barn cat discovered in 1961 in Coupar Angus, Scotland. This cat had distinctive ears with a fold that appeared cupped or cropped. This distinct characteristic caught the attention of William Ross, a local farmer and cat enthusiast.

Ross took one of the kittens that Susie had given birth to, and worked with a geneticist to crossbreed the cat with shorthair British cats. That’s how the Scottish Fold came into the world. There were some breeding problems in the beginning, such as the risk of ear infections, deafness, and mites. However, by the 1970s, this cat became quite successful in the US.

Below are a few facts about Scottish Folds you might have not known:

Scottish Fold cats’ trademark is their ears. What you don’t know is that this cat is not born with folded years. They develop them slowly over 3 to 4 weeks. The folded ears are due to a gene mutation, which some cats have and others don’t. So, if your Scottish Cat does not have folded ears, it means he doesn’t have the dominant gene.

Since Scottish Folds are playful and intelligent, they are easy to train. Read more about cat training here. To ensure your cat does not develop any negative habits, hire a force-free cat trainer to teach her using positive reinforcement.

3.     They Have High Health Concerns

While Scottish Folds are quite healthy and are not prone to many diseases, they do get sick from time to time. They are prone to heart disease, and this is a hereditary condition. Other health problems include:

Scottish Folds tend to develop arthritis in their tail quite early. If you see your cat holding her tail oddly or shying away when you try to pet her, there’s a high possibility that her tail might be affected. Visit a veterinarian immediately, and get your cat a full check-up.

Did you learn something new about your Scottish Fold? The more information you learn about your pets, the easier it becomes to care for them.  If you are having a hard time training your cat, get in touch with Dances with Dogs. They offer cat training in Miami for kittens and senior cats. You can opt for in-person training for individual attention or attend an online cat training class. To know more about their services or to schedule an appointment, call 786-299-1552.